Do you remember the photo taken on June 5, 2010; it was published on the cover of the 2010 autumn-winter edition of the Journal des Blais? 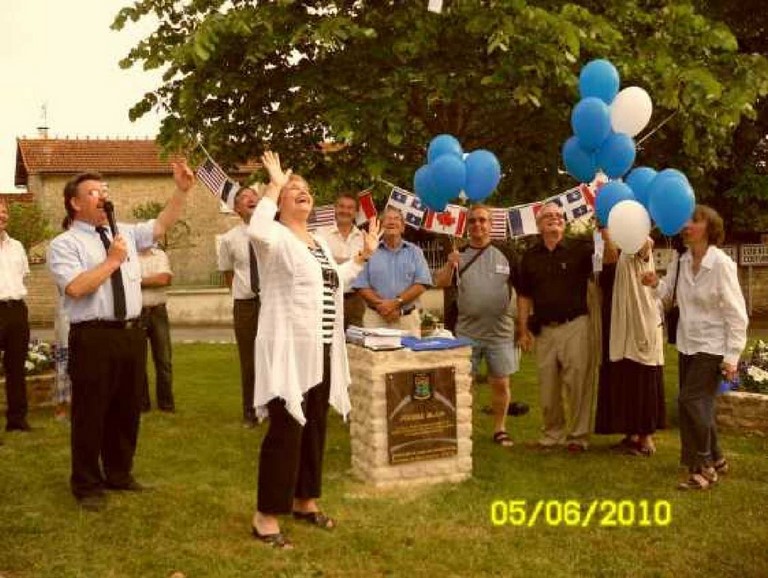 Souvenir of Saturday 05 June 2010
We came to visit France, in the land of our ancestor Pierre Blais, born in 1641.

The municipality of Hanc (79110) welcomed us and proposed a balloon release.

If you find this cardboard, please return it to the address on the back. Indicate your contact details separately.

During the unveiling ceremony of the commemorative plaque honoring our ancestor Pierre Blais in Hanc, we launched balloons to which were tied a note. On it we asked anyone finding one of these notes to send it back, indicating where it was found.

During the months following our trip, we received two letters informing of found notes.

About two years after our trip, in a letter dated July 24, 2012, that we received a few days later (July 30, 2012), Mr. Jean-Pierre Forgeot from Roôcourt, France, told us he found the note (see above) in the Bologne, Haute-Marne region.

THANKS SENT TO MR. JEAN-PIERRE FORGEOT
(in French)

According to our estimations, the note travelled about 370 miles (591 km) from Hanc.

Thank you Mr. Forgeot for taking the time to write.